As the northern hemisphere heats up for the summer season, the NASA/ESA Hubble Space Telescope's Wide Field Planetary Camera 3 (WFC3) is heating up our imaginations with this incredible image taken in both infrared and visible light. 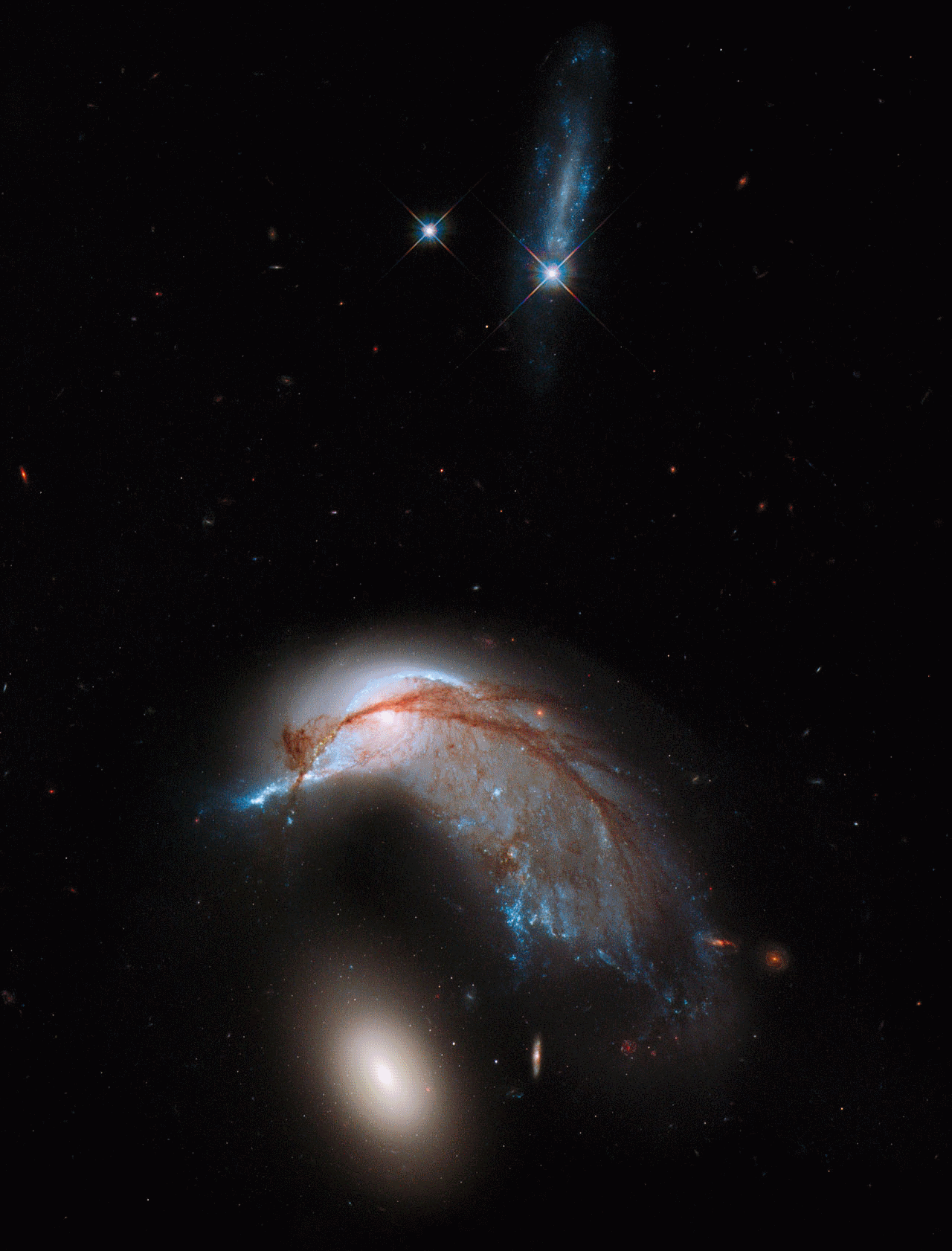 What you are looking at is a pair of interacting galaxies. Nicknamed "the Penguin" or "the Porpoise" by amateur astronomers, NGC 2936 used to be just a normal spiral galaxy before it got too close to a neighboring galaxy. Sometimes when galaxies are drawn together by a mutual gravitational attraction, they merge... and sometimes they get ripped apart!

Located in the constellation of Hydra about 326 million light-years away, galaxy NGC 2936 is slowly being torn to shreds by its cosmic companion. As you can see in this image, some of the spiral structure still remains - its central bulge lighting up the "eye" of the penguin - and the remnants of the spiral arms create the "body" where brilliant streaks of red and blue adorn the image. These streaks bend their way towards elliptical galaxy, NGC 2937. If you use your imagination, the companion galaxy looks almost like the penguin's egg, being carefully guarded by its parent.

This pair also goes by another name, Arp 142. While its name is a bit less fanciful, the Arp Catalog of Peculiar Galaxies is a well-respected collection. It was named after American astronomer, Halton Arp and published in 1966. This galactic assortment of weirdly-shaped galaxies was Arp's attempt to help understand how galaxies changed shape and evolved with time - something he felt was poorly understood. When he cataloged them, he did so by their unique appearances.

However, astronomers soon discovered that a large amount of the entries in Arp's work were actually interacting and merging galaxies. In some cases, the effects of these interactions can be violent... and the Arp 142 pair shows it.

Is this galaxy just chillin'? Hardly. Gas and dust are being pulling from the core and, as it is compressed, causes stars to form. These regions of stellar creation appear as blue clumps at the ends of the branches near the elliptical companion galaxy. Almost like veins, the reddish dust is being ejected from the galaxy's plane, highlighted by starlight left over from the nucleus and disk.

Look at the image again. In the upper portion you'll see two bright stars which are housed in the foreground. One of these shows an almost comet-like trail of material - this is another galaxy. At present, this galaxy is presumed to be about 230 million light-years from Earth and too far away to be part of the Arp 142 pairing.

The same is surmised of the other galaxies sprinkled around NGC 2936. They are part of the scene, but not part of the action. You'll see them blossoming like red and blue flowers in the background, and all captured by the incredible vision of the Hubble.

Did you find this article helpful? Give it a rating below!