Hickson Compact Groups (HCG) tend to be among the most challenging deep sky targets. So you can't imagine my surprise when I first laid eyes on HCG 68, also known as the NGC 5350 Galaxy Group. It was a partly cloudy night, with lots of friends, observing at 8,200 feet, below the volcanic dome on Mount Lassen in California. Through a hole in the clouds, I scanned, and ran across the single most stunning galaxy group I'd ever seen. Bright, varied, compact, and set off by a beautiful, colorful pair of stars in the same field of view. Calling out to my friends, I immediately had a line of 20 people waiting to see it. To this day, it remains a gem of the night sky, which I return to each year. 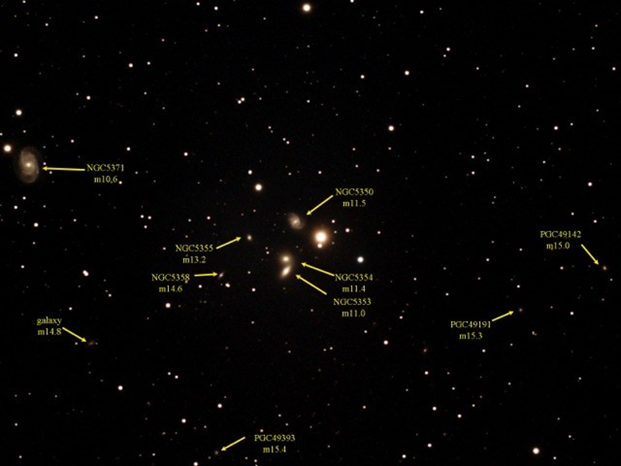 This is a great time of year to observe this fascinating galaxy group, with the constellation Canes Venatici rising in the northeast in early evening. The group comprises NGC 5350, 5353, 5354, 5355, and NGC 5358, ranging in magnitude from 11 to the mid-13's. At over 100 million light years distance, these are surprisingly bright beacons among the Hicksons!

The group can be viewed in an 8" telescope, with the two brightest members NGC 5353 and NGC 5354 will be obvious. NGC 5350 is an impressive spiral galaxy that appears as a dim, diffuse glow near the bright stars. The two remaining galaxies, NGC 5355 and NGC 5358 will likely require a 10" or 12" telescope. Here is a chart showing the constellation Bootes at 9 p.m., and the stars I use to "hop" to the group's position.

Now that you know how to get there, compare your observations to the following notes made by expert observers, Roger Ivester of North Carolina, and Jaakko Saloranta of Finland. Get out and hunt down this group - it is bound to become one of your favorites too. Come back and leave your observations in a 'Review' of this article.

Observing from my backyard in the foothills of western North Carolina. Telescope: 10-inch reflector

The brightest galaxy of the group is NGC 5353 at magnetite 11.1, and is very easy to see. It appears elongated with a brighter more concentrated middle. The next brightest is NGC 5350 which appears mostly round with a fairly low surface brightness. There is a magnitude 6.5 orange star just a few minutes west of NGC 5350 and is a bit distracting.

NGC 5354 is just north of NGC 5353 appearing almost in contact, and is mostly round with a very subtle brighter middle.

NGC 5355 is located SE of NGC 5350 and is very faint, requiring averted vision, with little detail.

NGC 5358 is the faintest and most difficult of the group, which is located SE of NGC 5355, and required averted vision. This galaxy could be seen only intermittently, appearing as faint mostly round glow.

This is a beautiful and interesting galaxy group, but seemingly is seldom observed by many amateurs.


Sketch by Roger Ivester, made with a number 2 pencil, colors inverted on a scanner.

With a 4.5 inch Orion SkyQuest, Hickson 68 appeared as a fairly bright quartet of galaxies excluding the elusive and marginal NGC 5355. Brightest in the group is NGC 5353 - an NW-SE elongated galaxy without an obvious core NGC 5354 appears smaller, somewhat concentrated and slightly fainter than -54. Despite being nearly of the same magnitude as the two previous galaxies, NGC 5350 appears fainter due to lower surface brightness but is the largest in the group. A fantastic galaxy group of small telescopes! 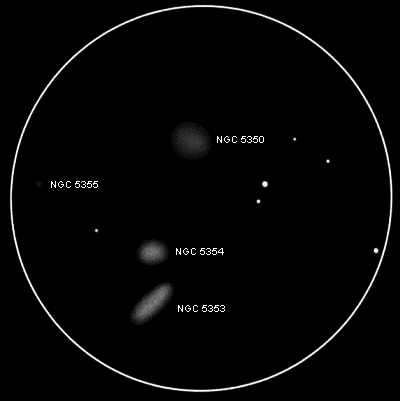 Another wonderful view occurred on the first trip, on the worst night. Everyone was being clouded out, but the single area I had objects left on my list, Canes Venatici, was somehow clear. NGC 5350, also known as Hickson 68, was drop dead gorgeous. A beautiful double star of different magnitude and colors dominated the field. Three bright galaxies gracefully arched away from the pair of stars, echoed softly by two other fainter galaxies, glowing dimly as if deeper in the great lake... echoes in the lake.

Were you able to locate Hickson 68? Leave a Review of this article and let us know what you saw, and what sized telescope you used to view it.