High Praise for the CT80 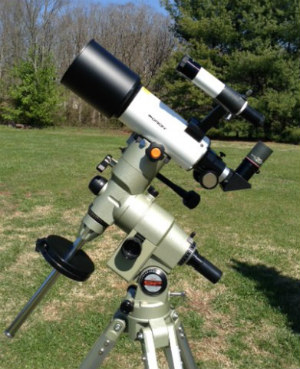 I've been wanting a small economical refractor for visual observing only. A telescope that could be used for those quick observing sessions when time is limited, and also for terrestrial viewing. A telescope which could easily be taken on trips, but take up very little space.

My son surprised me with an Orion model CT80 f/5 refractor as a gift.

This telescope is sold as an optical tube assembly, without accessories from Orion Telescopes and Binoculars. However, no problem. I have extra finders, an equatorial mount, plenty of eyepieces and a tripod for terrestrial viewing.

I was not wanting an expensive 70-80 mm apochromat, but an achromat that was light and easy to take outside and bring back in.

The dovetail mount fits perfectly to my vintage Orion/Vixen GP mount. I purchased a three pound counterweight about ten years ago, apparently just waiting for this scope. It balances the telescope perfectly.

A much smaller and lighter duty equatorial mount would be sufficient for the CT80, but the GP makes for a rock steady mount for sure. A good quality tripod could also suffice for either astro or terrestrial viewing.

When taking the scope outside, I carried both the telescope and mount with ease. With the tripod legs folded together, I was able to hold everything with one arm, while opening and closing the door. Everything was working perfect so far, but how would this little refractor perform on the night sky?

My first target was the beautiful double star, Castor, in Gemini. I started with 33x, but this was not enough magnification. With the employ of a 2.8x Barlow, giving a magnification of 93x, I was amazed. Castor was cleanly separated, with beautiful airy disc rings surrounding both components.

My next object was the Trapezium in Orion. The four primary components were crisp and clean even at 33x. When increasing the magnification to 93x, it was a beautiful sight indeed.

The Orion Nebula appeared very bright with excellent contrast. I was actually surprised at this view, which would only be possible with a telescope having excellent anti-reflective coatings.

M81 and M82, located in Ursa Major, have always been two of my favorite galaxies. They were very easy to locate, both fitting nicely within the large 1.8° field of view at a 33x magnification. Beautiful! This took me back forty years, when I first observed this galaxy pair with a 4.25-inch Edmund Equatorial reflector.

I'd been outside for almost an hour, which was my time allowance for this night.

Never would I take out my 10-inch equatorially mounted reflector, or my 102 mm refractor or 6-inch reflector, both also with EQ mounts for ~45 minutes. This telescope had already proved its value and convenience as being light and compact, and also providing excellent views of brighter deep-sky objects.

The scope passed all tests with flying colors. I'm very impressed with my new telescope.

A very portable and versatile telescope for an excellent price.