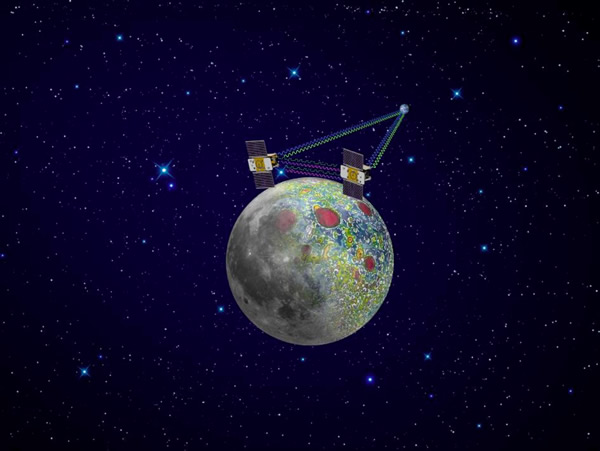 If you like to observe the Moon, perhaps you know about areas known as "mascons." These huge regions or "mares" contain rock of greater density that can cause lunar gravity anomalies significant enough to affect orbiting spacecraft. Thanks to NASA's Gravity Recovery and Interior Laboratory (GRAIL) mission, we now know much more about their origins.

Two orbiting probes, named Ebb and Flow, spent nine months in a nearly circular orbit near the poles of the Moon at an altitude of about 34 miles (55 kilometers) studying the lunar surface and uncovering mascons. Although their mission ended in December 2012, they taught us a great deal. As Ebb and Flow passed over areas of more and less gravitational pull, the distance between the twin probes altered slightly. Some mascons were visible features, such as mountains and craters, but others were hiding below the surface, out of reach for normal optical cameras.

So if they cannot be seen, how did the scientists know the mascons were really there? By combining the gravity data from GRAIL with computer models of large asteroid impacts, researchers added known details of the geologic evolution of impact craters to verify mascon sites.

"GRAIL data confirm that lunar mascons were generated when large asteroids or comets impacted the ancient moon, when its interior was much hotter than it is now," said Jay Melosh, a GRAIL co-investigator at Purdue University in West Lafayette, Ind., and lead author of the paper. "We believe the data from GRAIL show how the moon's light crust and dense mantle combined with the shock of a large impact to create the distinctive pattern of density anomalies that we recognize as mascons."

Unraveling the mystery of mascons hasn't been easy. Planetary scientists have searched for an explanation of their origins since their discovery in 1968. While most researchers agree they may have arisen billions of years ago from ancient impacts, they weren't sure of how much of this mass may have been caused by lava filling the crater, or the iron-rich mantle rising to the crust.

"Knowing about mascons means we finally are beginning to understand the geologic consequences of large impacts," Melosh said. "Our planet suffered similar impacts in its distant past, and understanding mascons may teach us more about the ancient Earth, perhaps about how plate tectonics got started and what created the first ore deposits."

So what exactly did the twin probes see? They created a lunar gravity field map where a mascon appears in a target pattern. A bulls-eye is a region of gravity surplus, encircled by a ring of gravity deficit. Around this is yet another ring of gravity surplus... a natural pattern which occurs when an impact crater is formed. At the point of bulls-eye, the density and gravitational pull is stronger, the result of "lunar material melted from the heat of a long-ago asteroid impact."

By furthering our knowledge of lunar mascons, we're also expanding our understanding of planetary geology - both here on Earth and our nearest celestial neighbor. Thanks to GRAIL, spacecraft missions to other celestial bodies will be able to navigate with enhanced precision.

"Mascons also have been identified in association with impact basins on Mars and Mercury," said GRAIL principal investigator Maria Zuber of the Massachusetts Institute of Technology in Cambridge. "Understanding them on the Moon tells us how the largest impacts modified early planetary crusts."

Did you find this article informative? Give it a rating below!