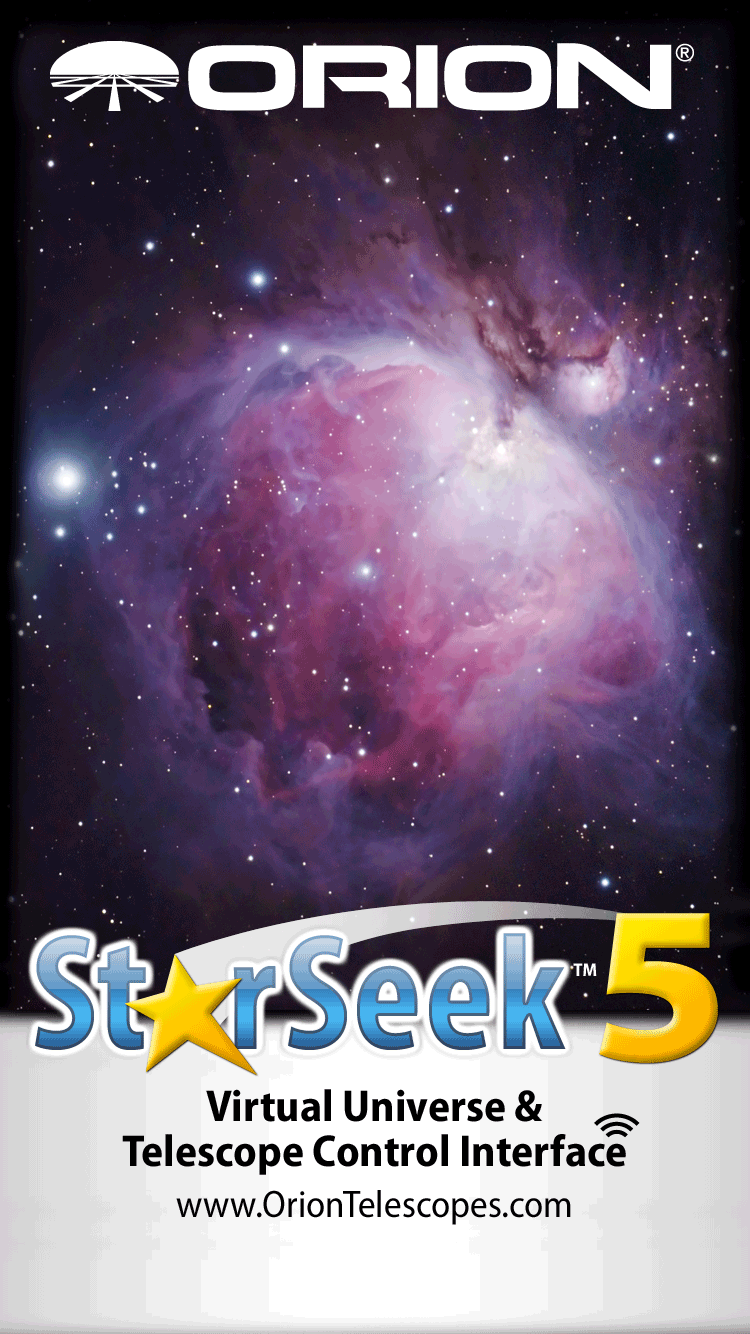 Explore the Night Sky and Control Your GoTo Telescope with Your Apple or Android™ Smartphone or Tablet!

Orion's StarSeek 5 is a powerful and easy-to-use astronomy app equally suited to beginning sky watchers on up to hard-core amateur astronomy enthusiasts and telescope users. A significant upgrade from StarSeek 4, the all-new StarSeek 5 adds a hugely expanded database and some terrific new features and functionality, while offering even more advanced wireless control of GoTo telescopes. StarSeek's streamlined interface puts the universe literally at your fingertips.

StarSeek is a "universal" app (in more ways than one!), meaning it works for iPhone, iPad, and iPod Touch — and now with Android smartphones and tablets too!

If you've used an earlier version of StarSeek before, here are just some of the enhancements you will enjoy in version 5: 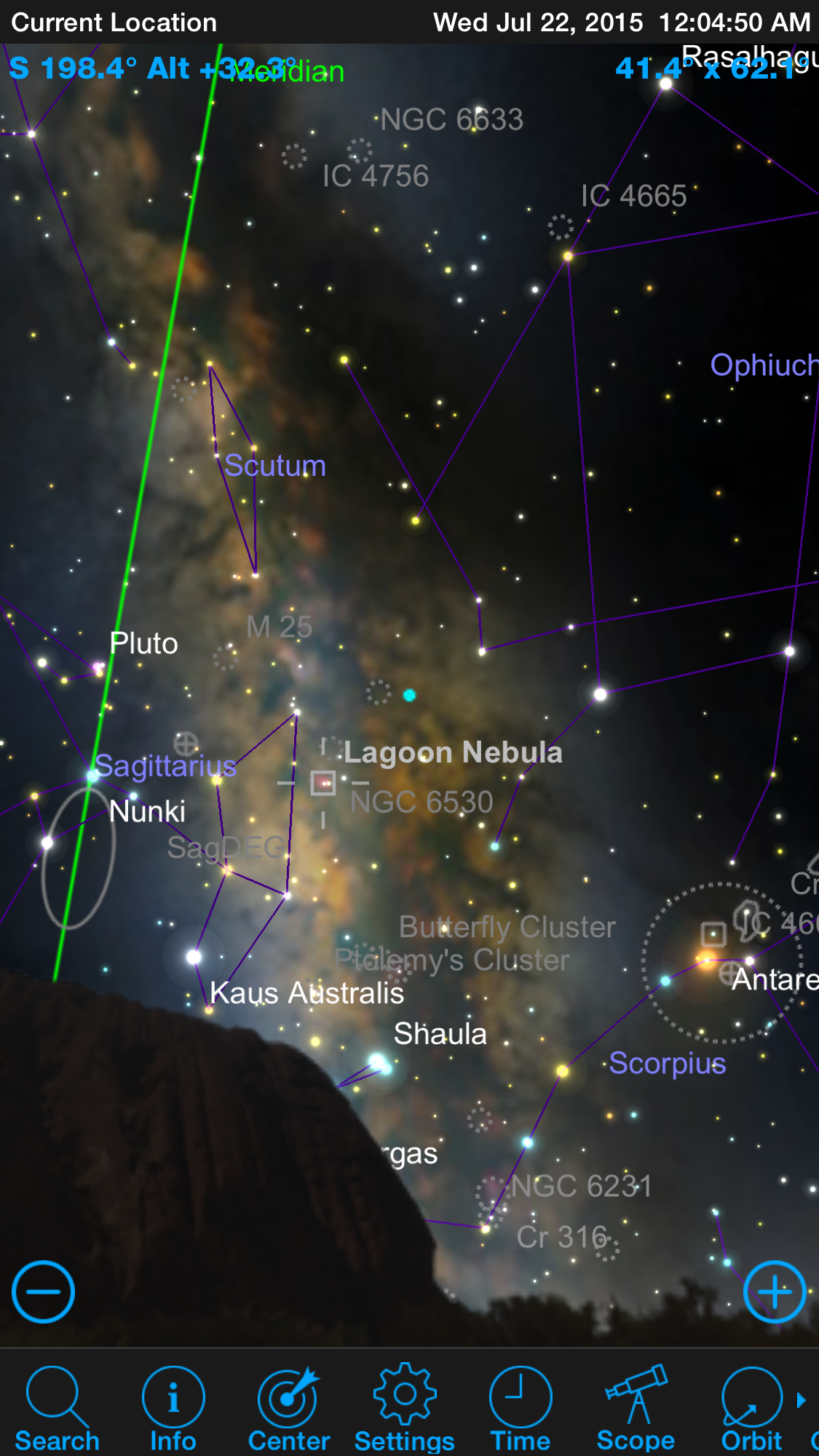 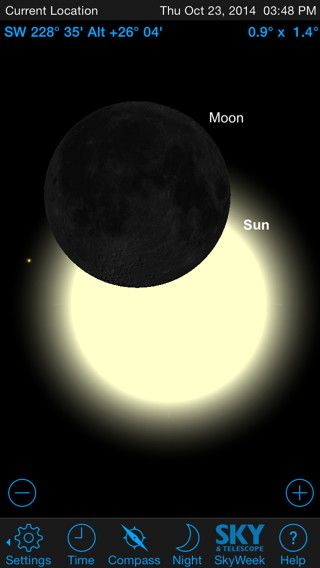 StarSeek depicts eclipses, conjunctions, transits, and occultations hundreds of years in the future. 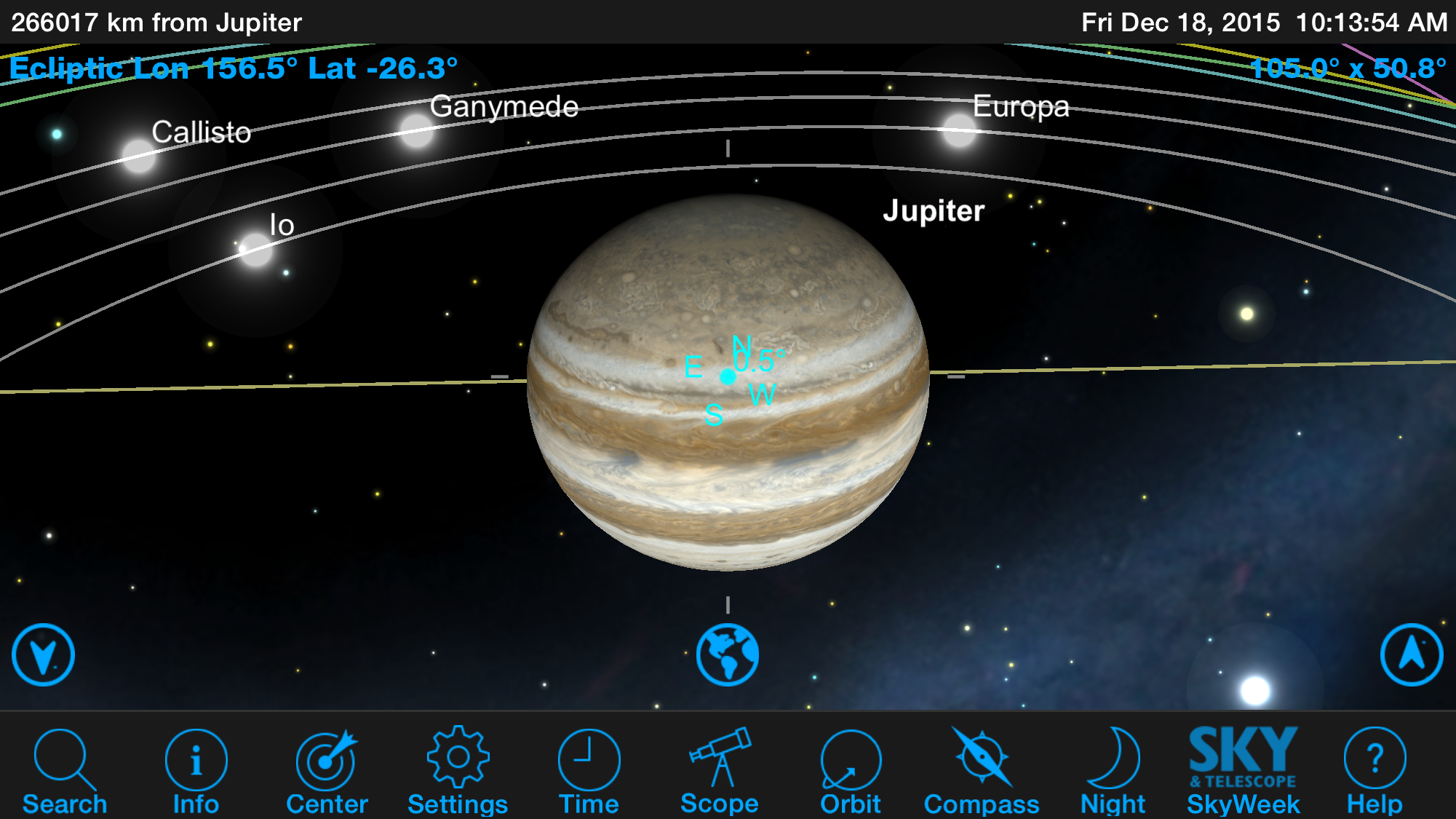 Leave Earth and explore Jupiter, it moons, and other solar system objects from orbit.

StarSeek 5 includes 2.5 million stars, 31,000 deep sky objects, the Solar System's major planets and moons, and over 4,000 updatable asteroids, comets, and satellites. Simulate the sky from any place in the Solar System, up to 10,000 years in the past or future. Expand your astronomical knowledge with over 1,500 encyclopedic descriptions of the constellations, stars, and planets. Enjoy more than 800 images from NASA space missions, the Hubble Space Telescope, and the world's foremost astrophotographers.

StarSeek 5 lets anyone identify what's in the night sky simply by holding your smartphone or tablet up to the sky! The dynamically changing map will show you "what's up" — literally — as you pan around the sky. Then just tap on an object to get a treasure trove of information about it. Pretty cool! The map is highly customizable, so you can enjoy just the amount and kind of detail you want to see. Search for any object in the database, and follow the arrow on screen to locate it in the sky. Animate the stars and planets with Time controls as StarSeek 4 compresses days, months, and years into a few seconds. Preserve your eyesight with red-screen "night vision" mode as you're exploring the skies. Stay updated with SkyWeek — the mobile version of Sky & Telescope Magazine's weekly column, with interactive sky charts. SkyWeek is accessible from right within the app. 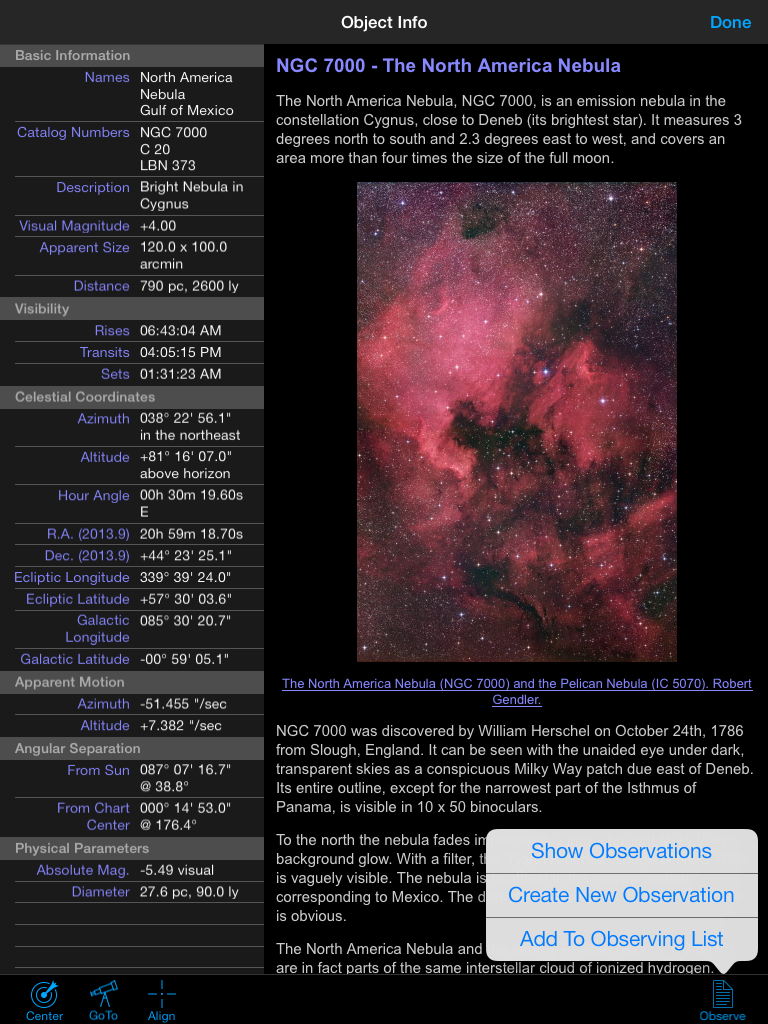 StarSeek's Object Info on the iPad gives you the facts and figures alongside detailed descriptions and a gallery of images.

With StarSeek 5, you can tap the Orbit button to fly into orbit around other objects in the Solar System, and beyond it. Follow eclipses, occultations, and transits! View the planets and their moons as only NASA space probes have. 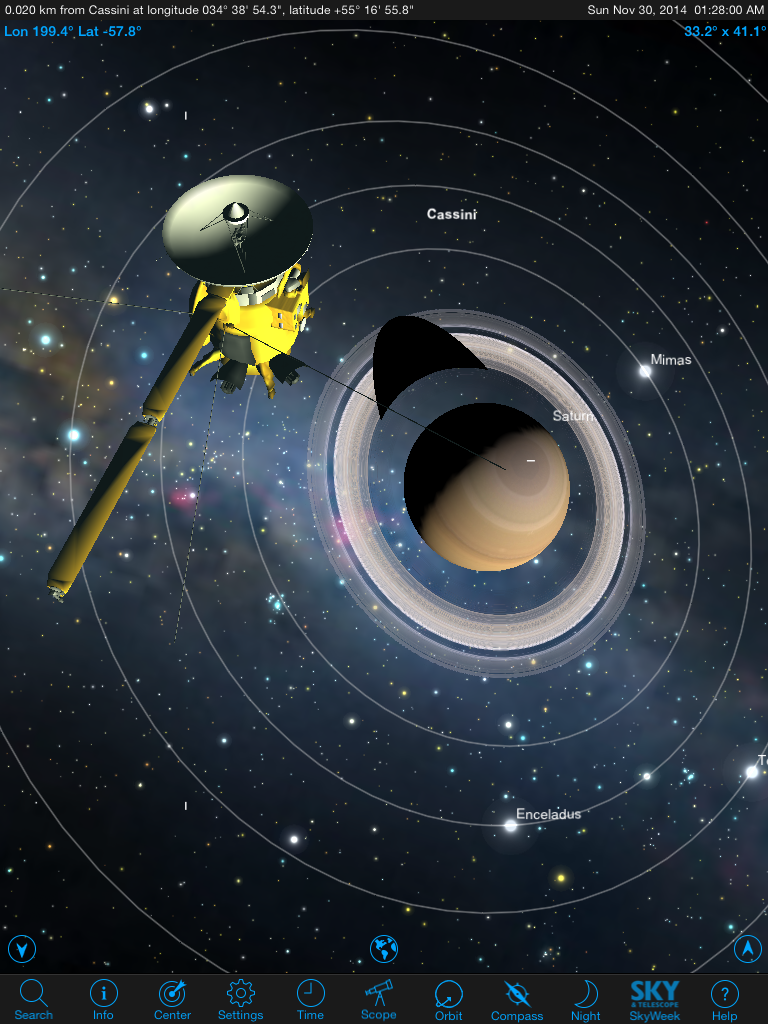 On an iPad's big screen there's lots of room to check out the planets and their moons. Here the Cassini spaceprobe heads for orbit around Saturn.

StarSeek 5 allows wired or wireless control of Orion's many computerized GoTo telescopes — from the portable StarSeeker 4 line to the large-aperture SkyQuest series of GoTo Dobsonians — as well as Celestron, Meade, and other brands (click here for a list). It can point your GoTo or "Push-To" telescope anywhere in the sky, using your smart device's built-in WiFi along with our StarSeek WiFi Telescope Control Module (sold separately). Plan observing sessions with Observing Lists, log your observations into them, and share them with friends. Once you try navigating the night sky with your iOS device and StarSeek, you'll never go back to controlling your telescope with its standard — and rather mundane by comparison — hand controller!

NOTE: The current StarSeek WiFi Telescope Control Module works only with Apple iPhone and iPad (iOS devices), but in spring 2016 will add compatibility for Android smartphones and tablets. 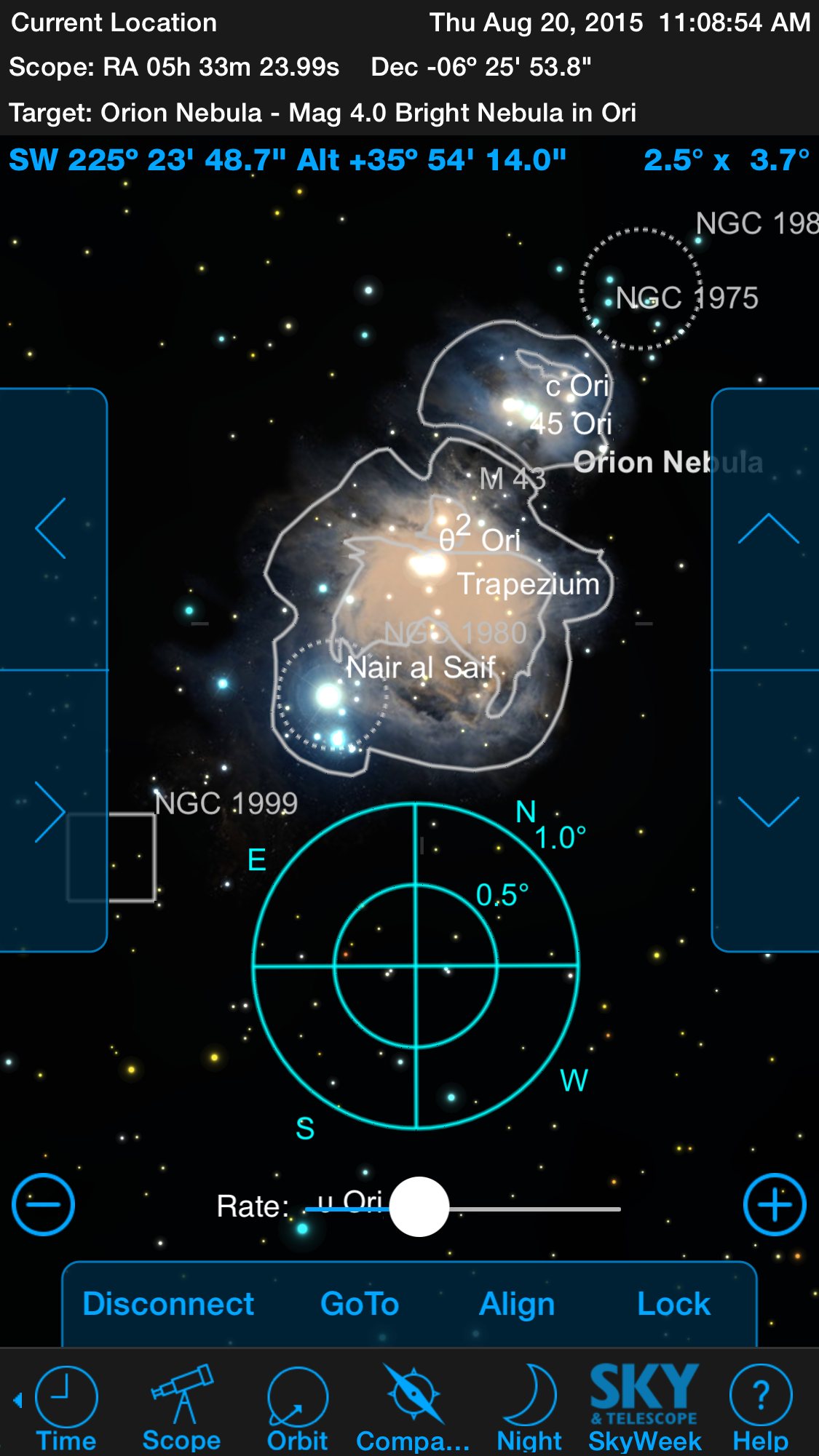 Control an Orion GoTo telescope (or other brands) from your iPhone or iPad! 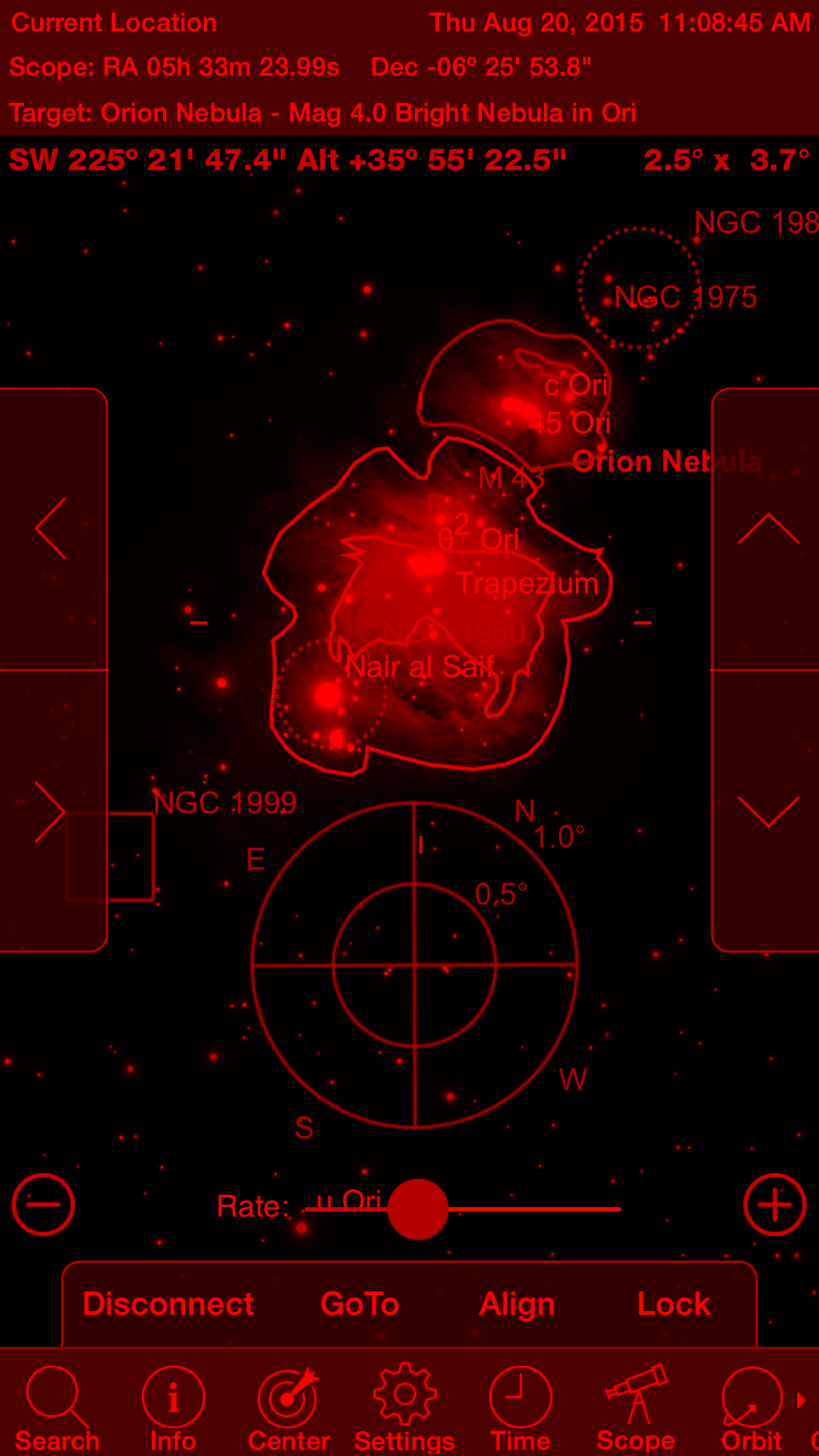 Red, night-vision mode can be turned on to preserve dark-adapted night vision. 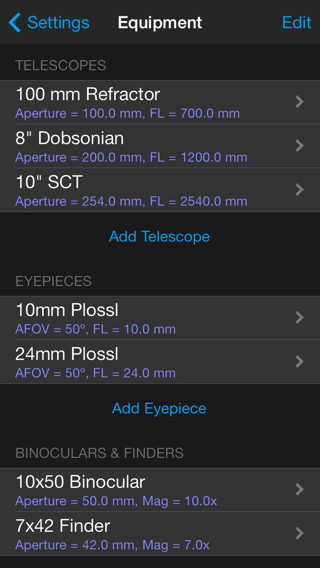 Enter your telescope and camera equipment into StarSeek and it can automatically compute the field of view and show it on the map.

Tap an object to call up detailed information as well as history, mythology, and science. 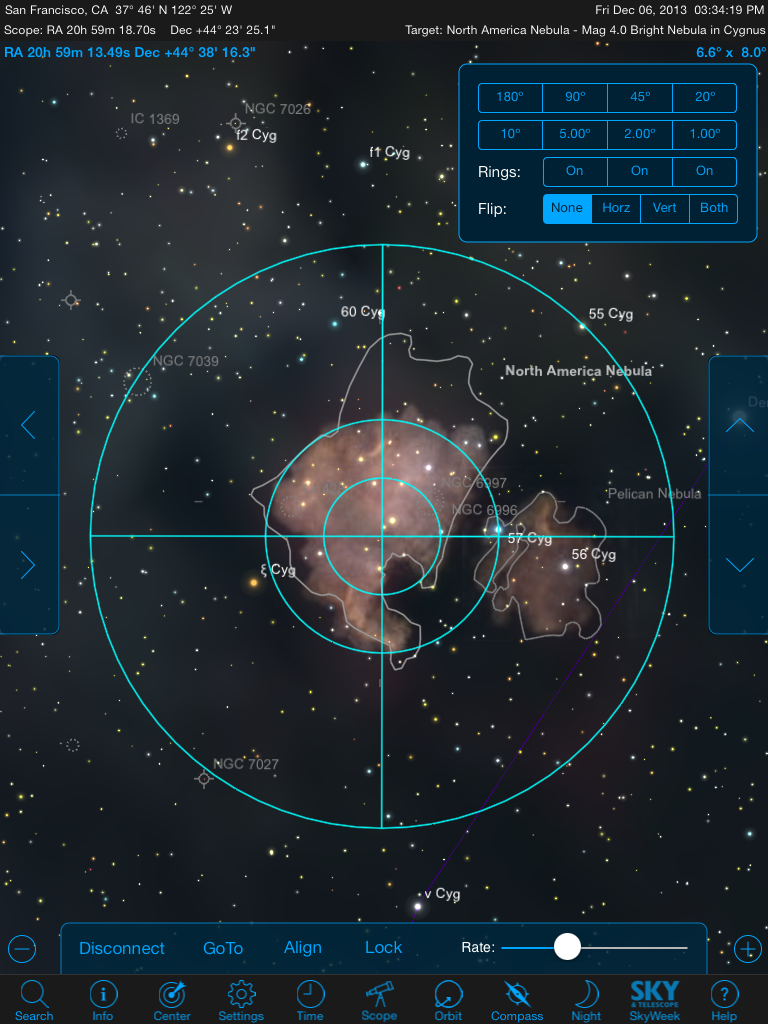 NOTE: There is no upgrade path from StarSeek 4 or earlier versions to StarSeek 5. This is an entirely new app.

Apple, the Apple logo, iPhone, iPad, and iPod touch are trademarks of Apple Inc., registered in the U.S. and other countries. App Store is a service mark of Apple Inc.