It wasn't until 1922 that NGC 2419 was finally determined beyond a doubt to be a globular cluster. For years the object baffled astronomers, who now also refer to it as the "Intergalactic Wanderer." The cluster's sky location is directly across from the Milky Way, which is unusual, but it's also extremely distant- some 300,000 light years from the Sun-and seems to be drifting through intergalactic space.

"Scanning the distances for globulars listed in Sky Catalogue 2000.0 reveals several other very distant objects, but none is even close to the brightness of NGC 2419," writes Walter Scott Houston in Deep-Sky Wonders. "Of the approximately 100 known globular clusters, almost all lie within a 65,000 light year radius of the galactic center."

The 'wanderer' is located about twice the distance from the Sun than the Large Magellanic Cloud, and magnitude estimates are between 9 and 10. Although it is one of the dimmest globular clusters, it is fascinating to peer at an object that is extragalactic.

Although this cluster can be picked up by smaller telescopes, it's quite a challenge, and we recommend using a 6-inch or larger telescope, especially if you're a beginner looking for it for the first time. NGC 2419 is located at RA 07hr 38.1m Dec. +38 53' 11.5M; at eastern end of 7-8 magnitude 2-star chain.

Below are two recent observations of NGC 2419 from seasoned observers. Take a stab at the March challenge object and share your own report in the review section of this article.

Roger Ivester, from his backyard in Boiling Springs, North Carolina:
When using my 10-inch at 191x, and averted vision, a very interesting feature was noted. The mostly round shape of the globular has a more concentrated area on the northern edge which creates a crescent shape. Can you see the brighter northern section? The following pencil sketch was made on a blank 5 x 8 note card with the colors being inverted using a scanner. 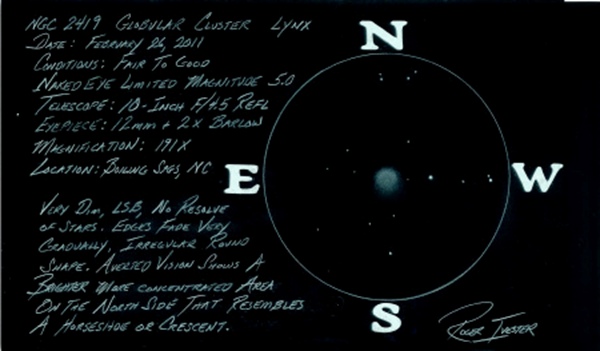 NGC was immediately obvious in the eyepiece, easily recognizable as a round globular cluster. Myself and one other observer could easily see a "grainy" or sugar-bowl-like texture to the cluster. We both thought that the brighter members of the cluster would be intermittently observable, although the cluster was not "resolved" in the classical sense. While the cluster was "easy" in this size instrument, the member stars we were seeing was right on the limit.

Using the GoTo, I slewed to NGC 2419, not necessarily expecting to see too much. But with 43x, the cluster was immediately obvious with direct vision! There are two fairly bright foreground stars, almost like a very wide double, that point directly at NGC 2419, the separations between the foreground stars and the distance to NGC 2419 are nearly identical making the entire asterism look like an exclamation point with a "fuzzy" period ( ..*). Since the globular was round and "fuzzy," it would have been easy to think this was a small galaxy; since there was no resolution of the cluster achieved, it would only have been the strong round symmetry that would cause someone to suspect it was not a galaxy.

At 43X, the cluster is visible with direct vision and quite noticeable. At 190x in this telescope, the cluster was so spread out that the cluster was far more difficult to see and the view was not satisfying (the power was too high for this small telescope and faint globular cluster).

Image of NGC 2419 by Jim Gianoulakis of Las Vegas: 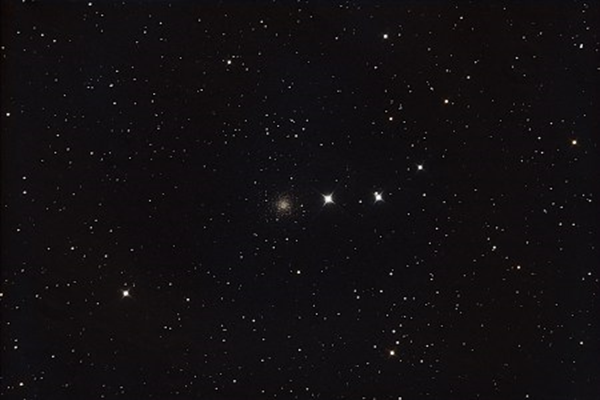